Buy the LP: Autographed LP, only available direct from Laurie! » 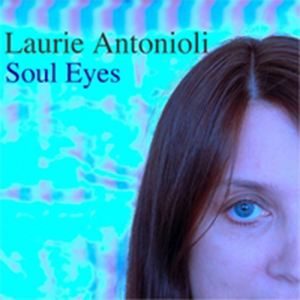 “[Antonioli’s] voice is deep-textured with mysterious dark underfolds. How many vocalists have stood as clearly revealed in their first LPs, accompanied only by a pianist? Admittedly, this is not just a pianist: it’s George Cables who is nothing if not virtuosic in support.”

“To hear Laurie Antonioli at her best, caressing Ellington’s “Prelude to a Kiss”, exploring the complex nuances of Mal Waldron’s “Soul Eyes” or basking langorously in “Lazy Afternoon” is to share what’s best about jazz ballad singing, the intimate revelation of a lyric and the personal interpretation of a song’s melody and harmonies.”

Jazz singers are not easy to find these days. True, we have Sarah Vaughn, Carmen McRae, Betty Carter, Ella Fitzgerald and a handful of masters, but if one looks to the horizon for newcomers, meaning singers that know about Bird, Diz, Duke and the like, there are few, if none. That’s why I take great pleasure in introducing you to Laurie Antonioli.

Laurie is a native of the Bay Area, born in 1958 in Marin. Her interest in jazz began when her grandmother gave her a stack of 78’s by Nellie Lutcher and she listened to “Hurry on Down,” “Fine Brown Frame,” and “I Thought About You,” which is included on this album. Her need for formal training led her to Mt. Hood Community College in Gresham, Oregon, where Hal Malcolm had founded the first vocal jazz program in the U.S. She also studied at Cal State Long Beach under John Prince. According to Laurie the major turning point in her training occurred when she toured Europe with Pony Poindexter. Singing bebop every night and being exposed to the jazz mystique by Pony’s stories only strengthened her desire to sing jazz. “I can’t learn material that doesn’t move me. The music I feel sincere about singing is jazz or something related. I have to identify with it and I have it feel it. That’s the most natural thing for me to do.”

When I first heard Laurie about five years ago, I was most impressed by her harmonic and rhythmic ideas, and I was apparently not alone in that perception, for Laurie has been invited to sit in with the likes of Joe Henderson, Cedar Walton, Jon Hendricks, Mark Murphy and Bobby McFerrin. “Somehow, through my connection with this music, I’ve been able to hook up with some really fine people.”

That quote is a perfect segue to words about the other musician on this date, the masterful George Cables on piano. George has rather awesome jazz credentials, having played and recorded with the best including Art Blakey, Sonny Rollins, Joe Henderson, Freddie Hubbard, Dexter Gordon, Art Pepper and Bobby Hutcherson to name just a few. Having Goerge move to San Francisco a few years ago has greatly enriched the Bay Area Jazz scene.

I attended a couple of rehearsals as Laurie and George were getting ready for this date and of course was impressed by their considerable skills. Yet, by the time we reached the studio they had developed that quality this is vital to a jazz performance: sympathetic interplay.

Watching Laurie Antonioli perform live has always been special for a number of reasons, not the least of which is her choice of material in a club. Laurie will give you everything from “Dearly Beloved” to “Now’s the Time” to Wynton Marsalis’ “Twilight,” a tune that one would not normally think of as a vocal. The range of material you are about to hear will give you some idea of what I mean.

The album opens with “In a Mellow Tone,” one of two Ellington tunes on the date. The groove seems appropriate for an opener, easy, relaxed and tasty. “Lazy Afternoon” showcases what I think is Laurie’s strongest quality at this point in her development, the ability to sing pretty with just the right amount of sensuality. I envisioned two lovers lounging in some sylvan glade, gently kissed by the warm spring sun. “Bird Lives” is one of two tunes by Larry Gelb, whose works have appeared on a couple of albums with Kim Parker. Laurie feels that Gelb could be the “Next Guy,” and I do agree. His melodies are always interesting, his lyrics are hip and humorous, and most important they tell a story about something meaningful. Charlie Parker’s “Barbados” follows in tight segue. We thought we might have some trouble with this one, but Laurie and George were right in the groove with their phrasing. George’s left hand is marvelous here. I have to remember that there is no bass player on this date. Next is “Soul Eyes,” Mal Waldron’s gorgeous ballad. Mal also wrote the lyrics and I don’t recall another vocal version of this tune. It is a difficult song to sing, but it has been part of Laurie’s repertoire since Mal gave her these lyrics some years ago, and the familiarity is evident.

Side 2 opens with “Weaving Patterns,” perhaps the most difficult tune on the album. This one began as a poem by Laurie that bassist Chuck Metcalf set to music. The haunting melody is one that grows on you. I think our engineer and benefactor Fred Catero had doubts about this one at first but after a few takes, he began to warm up to it. George sounds great here as usual. As I mentioned before, “I Thought About You” was one of the tunes that got Laurie interest in jazz. We used a different form here. Laurie opens with three choruses, while George subtly builds the rhythm with his left hand.

“Little Girl” is a composition by trombonist Wayne Wallace with lyrics by Laurie, and this one tells a special story. Laurie wrote this one Sunday morning after being awakened by her lovely daughter Mayana. Now on a Sunday morning the musician would rather sleep which is in conflict with the duties of a mother. Laurie describes Mayana’s actions as “terrorizing,” but listening to the tune, it is clear that the music and the mother are in perfect balance. George’s solo keeps the image of a playful child in mind.

“Prelude to a Kiss” finds Laurie and George in a wistful mood and again the interplay of two fine musicians is evident. I have generally thought of George Cables as a swinger, but this album and this tune in particular reveal a gentle, sensitive side to his playing.

The album closes with “I’d Like to Melt Your Ego for Dinner,” another Larry Gelb tune. Laurie handles the lyrics and melodic nuances flawlessly and George again supplies a lot of rhythm for one musician.

And with that we have the first venture for Laurie Antonioli, a jazz singer who has definitely arrived.